How far would decent human beings be willing to go, when tragedy blurs the line between just and unjust? With “A Second Chance”, Susanne Bier and Anders Thomas Jensen have crafted another startling yet moving drama about how easily we lose our grasp on justice, when confronted with the unthinkable, and life as we know it is hanging by a thread. 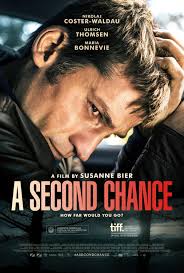 And sadly that is all that I liked in the movie.