I have been watching this on repeat since it first popped up on my timeline yesterday. I am in gastronomic heaven since then! 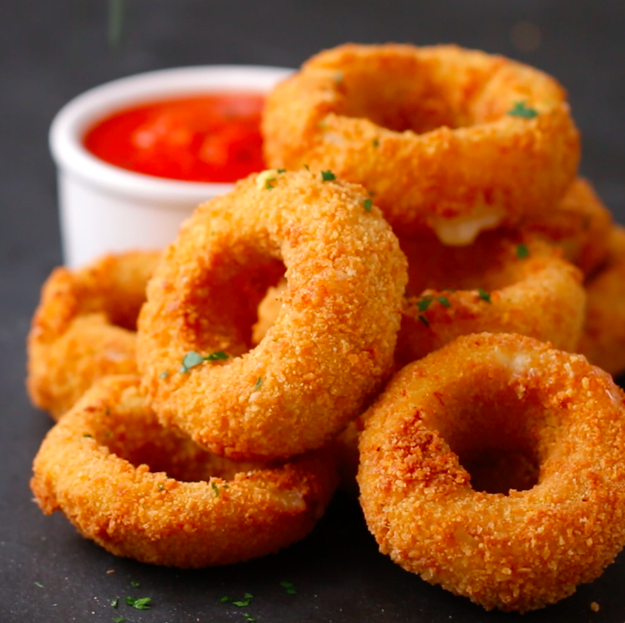 INSTRUCTIONS
Peel and cut onions into 1-centimeter rings, then separate the rings.

Slice the mozzarella into 4 even strips, and place a smaller onion ring in the center of a larger one. Fill the gap between the rings with strips of mozzarella. Repeat with remaining onion rings and freeze them for 1 hour.

Heat the oil in a pot over high heat. Fry the rings until golden brown, being careful not to fry them for too long as the cheese may ooze out completely.

Drain on a paper towel, then serve with marinara!

With Makarsankranti coming up, I will be helping my mom make Tilgul….or rather the flat version of it i.e. Tilachya vadya which loosely translated in English would be Sesame cakes 😛 Makarsankranti is the festival of harvest when the long winter nights come to an end. A special delicacy which is prepared in Maharashtra for this festival is the Tilgul. It is small & laddoo like & is always invariably hard to break…a test of how strong your teeth are.

These are the stone hard til gul  along with sugar which taste yummy.

Knowing our dental limitations, we at our home make a softer variety of the same which is equally tasty.

Dried coconut – 1 large half as the topping

1. Roast the sesame, groundnuts & grated coconut separately till they turn golden brown. Keep some of the roasted coconut aside to be used as topping later. Crumple the remaining half of the coconut by hand into a fine powder.

2.  Grind the sesame & groundnuts. Then add the powdered coconut into it. Set it aside to cool.

3. Heat the jaggery & allow it to melt. Add a little water to it (2-3 tbsp) while its melting. Break any lumps that are formed. Add a little of cardamom powder to it.

4. Next add the ground sesame, coconut & groundnut mix & mix it well & allow it to cool a little.

5. Take a large dish & apply some ghee to it & before the mixture solidifies cut it into diamond shaped cakes. Garnish with the coconut which we had previously grated & roasted!!!

Will add the pictures once I make them over the weekend! 😉

When 19th-century British explorers first discovered the tombs of the ancient Egyptians, the folks back home in England were captivated. Stories abounded in the popular press about cursed mummies, haunted crypts and ancient gods whose wrath followed the despoilers home and hounded them to an early grave.

Newspapers ran breathless accounts of how the returning heroes, their families and their fortunes were cursed forever by the vengeful spirits of that far-off land. Sudden illness, thwarted love and ruined finances were thought to follow in the wake of the Egyptian explorer, and spines tingled to hear the tales of bad luck and supernatural misfortune carried home from the East.

The archaeologists rolled their eyes and went about their business, but the public ate it up.

Literally, in some cases. The heady aromas and spices of the Middle East were suddenly in very high demand. Exotic flavors from the mysterious region were in vogue, just like the tales of high drama and daring adventure that accompanied them.

The truth was usually a fair bit more pedestrian. Though no less tasty.

Ancient Egyptians ate well. Even the poorest workers had access to plenty of bread, beer and a certain amount of fish and game when times were flush. You could even indulge your sweet tooth—if you could save up enough money every now and then for some precious honey or ground-up dates.

Egypt sat right on the crossroads of the ancient spice road. Its population would have had access to spices from the East like cumin, coriander and cinnamon. Pepper would be a much later arrival, most likely with the Greeks, but salt was available and used as a preservative—even in the dry air that left meat considerably less exposed to rapid decay than it would be in Europe.

Coriander was prized as an aphrodisiac. There’s evidence that coriander seeds were planted in tombs as early as the 21st dynasty (around 1000 B.C.) as a symbol of eternal love and enduring passion. Cumin was also regarded as a sign of faithfulness, and cumin seeds were sometimes carried in pockets by soldiers and merchants as a memory of those waiting for them back home. They were also thought to settle the stomach and aid in digestion.

Cinnamon, meanwhile, was considerably more expensive than cumin and coriander, and was therefore less readily available to the common laborer of ancient Egypt. Often used in the embalming process, it is in fact a powerful antimicrobial agent, which means it can help prevent the spoilage of meat. When available, it would be used very sparingly, mixed in with other spices so that its flavor and effectiveness would be enhanced.

A mixture of these three spices— along with toasted nuts, salt and garlic—was used to sweeten the coarse bread of daily life in ancient Egypt. That tradition lives on today in dukkah, a popular spice blend that modern Egyptians enjoy just as their ancestors did thousands of years ago. Follow the recipe below to bring a taste of ancient Egypt into your own kitchen. It can be used as a condiment for roasted meat, as a topping for hummus or as a dip for good, crusty bread.

Preheat oven to 400 degrees. Spread hazelnuts and almonds in a single layer on separate baking sheets and roast for about 10 minutes, shaking the pans every few minutes to prevent scorching. Be especially careful of the nuts in the corners and at the edges, as these will get hot faster. Take the almonds out a minute or two before the hazelnuts, as these are more prone to overheating and turning bitter. Allow nuts to cool completely.

Toast coriander, cumin and sesame seeds in a skillet over high heat for about 3 minutes, stirring constantly. Remove from heat, transfer to a plate and allow to cool completely.

When ingredients have cooled, transfer to a spice grinder or food processor. Add the salt. Pulse all ingredients together until roughly the size of breadcrumbs. Don’t over-process the mixture—you should stop when it’s still dry and coarse.

Serve with bread and good olive oil. Dip bread first into oil, then the dukkah. Can also be used as a dry marinade for meat, or as a topping for hummus.