A young queen, who is married to an insane king, falls secretly in love with her physician – and together they start a revolution that changes a nation forever. 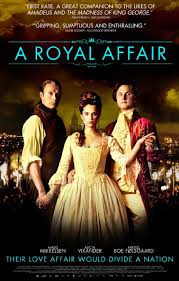 This movie was excellent in every aspect. The actors, the locations, the dialogues each & everything contributed to the sheer brilliance which was A Royal Affair.

I have no idea about how accurate this movie was in terms of real history but I loved the story as was shown in the movie. Though it was heart breaking to see Johann & Caroline not get their happily ever after, while the Royal Affair lasted, it must have been the most beautiful relationship of that time, enhanced because the couple loved each other so much & that is so rare even today.