Armaan is a Pakitani romantic movie directed by Anjum Shahzad. It has Fawad Khan & Aamina Sheikh in lead roles. For a detailed story of the movie please visit the wiki page here. 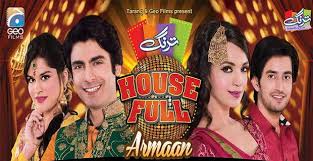 I thought that the whole movie was extremely stupid. It has the same old story of a rich spoilt guy falling for the naive girl which we have seen in countless movies. It reminded me of two very hit Bollywood movies in parts, one was Janam Samjha Karo & the second one Naukar. The direction was terrible. The songs were quite ridiculous especially the Ko Ko Korina. The beats of the song were great as was the playback but the choreography spoiled it completely. A man dancing with a flashing light, people dressed as animals for no reason, couples dancing in & out & then randomly the guy stopping to eat pani puri? :O The incident with the eunuch was funny but a guy who goes about bumping into women intentionally isn’t a flirt, he is a cheap guy! Also, this movie had the strangest product placement I have ever seen. A carton of milk/ juice of one particular brand was always seen flashing whenever anyone sat down to eat.

The entire story was predictable from start to finish. Fawad Khan, Aamina Sheikh & Vassay Chaudhary (Danny) were great in their roles but there is only so much an actor can do with such a terrible script & direction. The girl who played Zarnaab’s sister was terrible. The costumes were extremely tacky, the make up too very loud especially in all the party/ wedding bits (the heroine’s sister had some very weird golden highlights in her black hair :|). The playback singers are great but Shreya Ghoshal’s sweet voice for Aamina was a mismatch. They should have used a singer with a heavier voice than Shreya’s.

Give this movie a skip. It is a total waste of time.