A Marathi movie based on a play by the same name, Katyar Kaljat Ghusali is a journey of two maestros Pandit Shastri & Khansaheb as they experience fame, failure & betrayal. The movie is being considered for the UNESCO’s Fellini medal. 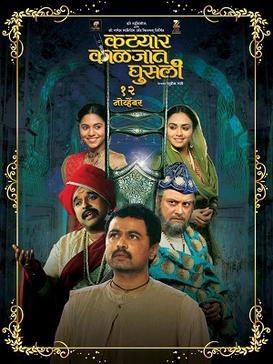 My mother had watched the original play when it was running in theaters in the 1960s & hence was eager to watch this movie. Unfortunately we could not make it as she fell ill on the day we were supposed to go. Finally I had the chance to watch it when it was telecast on ZEE Marathi a few weeks ago.

The total inaction on Sadashiv’s & Panditji’s part made it a one time watch for me. Before ending this post I must mention that the idea of summoning glow worms with your singing is divine. Do that in front of a girl & she is going to be very very impressed! 😉