Hannibal Lecter emerges from the nightmare of the Eastern Front, a boy in the snow, mute, with a chain around his neck. He seems utterly alone, but he has brought his demons with him. Hannibal’s uncle, a noted painter, finds him in a Soviet orphanage and brings him to France, where Hannibal will live with his uncle and his uncle’s beautiful and exotic wife, Lady Murasaki. Lady Murasaki helps Hannibal to heal. With her help he flourishes, becoming the youngest person ever admitted to medical school in France. But Hannibal’s demons visit him and torment him. When he is old enough, he visits them in turn. He discovers he has gifts beyond the academic, and in that epiphany, Hannibal Lecter becomes death’s prodigy. 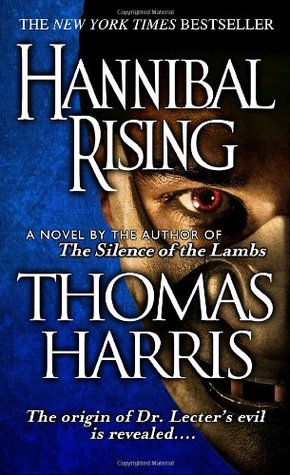 Hannibal Rising is the last book in the Hannibal series. It begins with a Hannibal who is an innocent little boy born in an aristocratic family & despite the war is leading a happy life with his family. Tragedy strikes when his family is killed & his little sister Mischa is cannibalized in front of his own eyes. The book covers his journey from innocence to cannibalism & to revenge.

I loved this entire series & except for the first book, Red Dragon, found all of them engaging. I had read Silence of the Lambs nearly a year back but my interest in the series was rekindled when I started watching NBC’s Hannibal. As the show is coming to an end I thought I needed to read the books which inspired such a lovely show. I will write more on the show when it ends in a few weeks time. But till then it was great to finally read the novels completely & learn more of the wonderful Dr. Lecter, especially some of it from his own POV. 🙂

“Are you looking for sympathy? You’ll find it in the dictionary between shit and syphilis”

“Mischa, we take comfort in knowing there is no God. That you are not enslaved in Heaven, made to kiss God’s ass forever. What you have is better than Paradise. You have blessed oblivion. I miss you every day.”

“Hannibal had entered his heart’s long winter. He slept soundly and was not visited in dreams as humans are.”

Years after his escape, posing as scholarly Dr. Fell, curator of a grand family’s palazzo, Hannibal lives the good life in Florence, playing lovely tunes by serial killer/composer Henry VIII and killing hardly anyone himself. Clarice is unluckier: in the novel’s action-film-like opening scene, she survives an FBI shootout gone wrong, and her nemesis, Paul Krendler, makes her the fall guy. Clarice is suspended, so, unfortunately, the first cop who stumbles on Hannibal is an Italian named Pazzi, who takes after his ancestors, greedy betrayers depicted in Dante’s Inferno. Pazzi is on the take from a character as scary as Hannibal: Mason Verger. When Verger was a young man busted for raping children, his vast wealth saved him from jail. All he needed was psychotherapy–with Dr. Lecter. Thanks to the treatment, Verger is now on a respirator, paralyzed except for one crablike hand, watching his enormous, brutal moray eel swim figure eights and devour fish. His obsession is to feed Lecter to some other brutal pets. 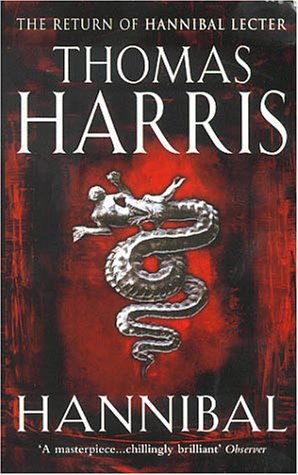 I had read The Silence of the Lambs a long time ago, and hence after Red Dragon skipped to the third book, Hannibal. After a very slow & boring Red Dragon this book was a treat.

Some great quotes from the book:

“I think it’s easy to mistake understanding for empathy – we want empathy so badly. Maybe learning to make that distinction is part of growing up. It’s hard and ugly to know somebody can understand you without even liking you.”

“If I saw you everyday forever, I would remember this time.” ❤

“It occurred to Dr. Lecter in the moment that with all his knowledge and intrusion, he could never entirely predict her, or own her at all. He could feed the caterpillar, he could whisper through the chrysalis; what hatched out followed its own nature and was beyond him. He wondered if she had the .45 on her leg beneath the gown.
Clarice Starling smiled at him then, the cabochons caught the firelight and the monster was lost in self-congratulation at his own exquisite taste and cunning.”

“On a related subject, Signore Pazzi, I must confess to you: I’m giving serious thought to eating your wife.”

Will Graham stands in a silent, empty house communing with a killer. An FBI instructor with a gift for hunting madmen, Graham knows what his murderer looks like, how he thinks, and what he did to his victims after they died. Now Graham must try to catch him. But to do it, he must feel the heat of a killer’s brain, draw on the macabre advice of a dangerous mental patient, Dr. Hannibal Lecter, and follow a trail of microscopic clues to the place where another family has already been chosen to die–and where an innocent woman has found the Dragon first.

The first book in the Hannibal Lecter series, Red Dragon has more to do with Francis Dolarhyde than with Dr. Lecter. We only get few glimpses of the doctor while too much of the novel is eaten up by Will, Jack & Francis.

This book has little or no impact on the story of Dr. Hannibal Lecter. He is awesome even without it & it does not add anything extraordinary to his story. Thomas Harris could have easily given this a miss or written it as an independent novel.

“Fear comes with imagination, it’s a penalty, it’s the price of imagination.”

“What he has in addition is pure empathy and projection,” Dr. Bloom said. “He can assume your point of view, or mine – and maybe some other points of view that scare and sicken him. It’s an uncomfortable gift, Jack. Perception’s a tool that’s pointed on both ends.”

“Don’t think you can persuade me with appeals to my intellectual vanity.”

“He’s a monster. I think of him as one of those pitiful things that are born in hospitals from time to time. They feed it, and keep it warm, but they don’t put it on the machines and it dies. Lecter is the same way in his head, but he looks normal and nobody could tell.”

“You know what he said? Bloom said maybe he’s trying to stop.”